Today We are ALL Greek...Give Greece a Chance! 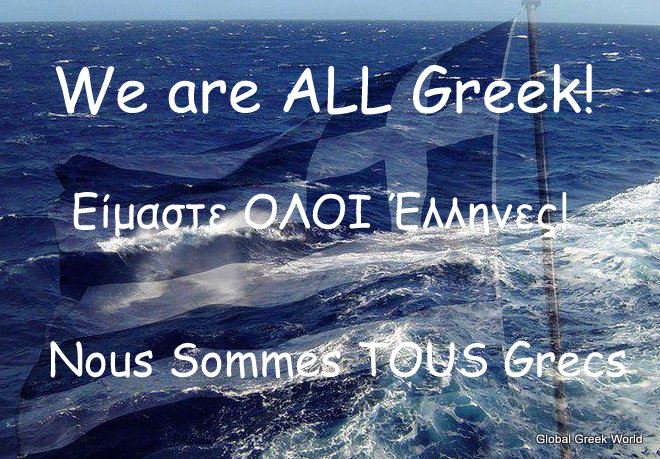 Five years of a crippling austerity programme imposed by the IMF/EU/ECB Troika in exchange for financial support, saw Greece and its people plumb the depths of poverty and desperation. Unemployment skyrocketed especially among the youth, many of whom had been highly educated at the expense of the state, suicide rates increased dramatically and Greece's middle class was almost eradicated overnight as a new class of nouveau-pauvre came on the scene.

People who had had a job, a house and a car suddenly found themselves on the street when unemployment knocked on the door.  The brain drain of Greece's young educated people migrating abroad looking for a better tomorrow didn't help the situation. The tomorrow seemed to take forever as in the interests of fiscal tightening and balancing, measure after measure and tax after tax was imposed, leading to a vicious circle of economic restriction, aka austerity, and little or no growth or hope.

2014 was to be the first year that Greece would see some growth. Tourism boomed, Greece was the no 1 place to be and to all intents and purposes, it looked as if Greece was finally going to start on the road to recovery.

At the meeting with the Troika in Paris in November of 2014 was fruitless. The grey-suited number-crunchers known as the Troika decided that there hadn't been enough progress on the structural reforms and that it would not give its approval for the next tranche of funds due under the bailout agreement. Its insistence on additional measures and the government's inability to pass new measures, forced Greek Prime Minister Samaras' hand and, after Parliament's failure to elect a new President of the Republic on 29 December 2014, led to a call for early elections.

On 25 January the Greek people gave the left-wing party, SYRIZA, the mandate to govern Greece.

No, Syriza didn't go from 3% to 23% and 33% because people in Greece suddenly turned Communist! The Greek people were sending a message that austerity without hope and growth, the kind of austerity that had been imposed on them these last few years was having the opposite effect. It was destroying the very fabric of Greece.

The vote to SYRIZA was an attempt to change things. A hope that the younger, less jaded by power, and primarily unfettered by corruption skeletons in the closets, SYRIZA, would do just that. People had had enough ...of austerity, of lies, of humiliation, of yes men.
People voted Syriza for what it represented:

HOPE. Hope that something could change.

Syriza represented new blood, young people with enthusiasm and guts to make deep changes despite some of the pre-election rhetoric which was like going backwards.

Within days of the election, new PM Alexis Tsipras and new Finance Minister Yanis Varoufakis received what we will euphemistically call 'congratulatory' visits from EU strongmen Martin Schultz and Jeroen Dijsselbloem, only to be surprised by Athens' response.

The next week the two toured the European capitals in an attempt to gain time and allies for the new government's financial plans which include many of the extensive structural reforms required by its lenders but would secure a breathing space for the government to be able to take stock.

Greece was once again the word in the world.  Everyone, from the notables to the not-so-notables, had his or her view on whether Greece should stay or go as the spectre of GREXIT raised its ugly head again... From Krugman to Stiglitz and Greenspan the economists of the world had something to say about Greece.


FinMin Varoufakis turned into a media superstar with his non-conformist attire and attitude, with some commenting positively  and others negatively, but not one amongst them indifferent! Even IMF chief Christine Lagarde would wax lyrical about the Greek Dream Team's capabilities. 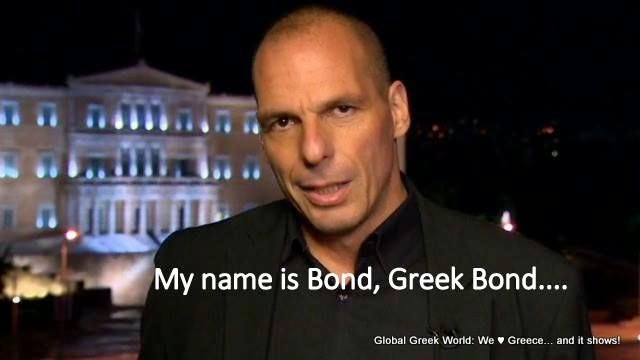 Our very own contribution to the Varoufakis Collection

From London to Berlin, the message they seemed to receive was not supportive at all. One by one our EU 'friends' aligned themselves behind Berlin, even President Obama seemed to withdraw the support he gave initially ... and yet something seemed to be moving.

At home in Athens, thousands of people gathered in a rally in Syntagma without teargas and barricades, standing peacefully behind their government as it fought for Greece's future. 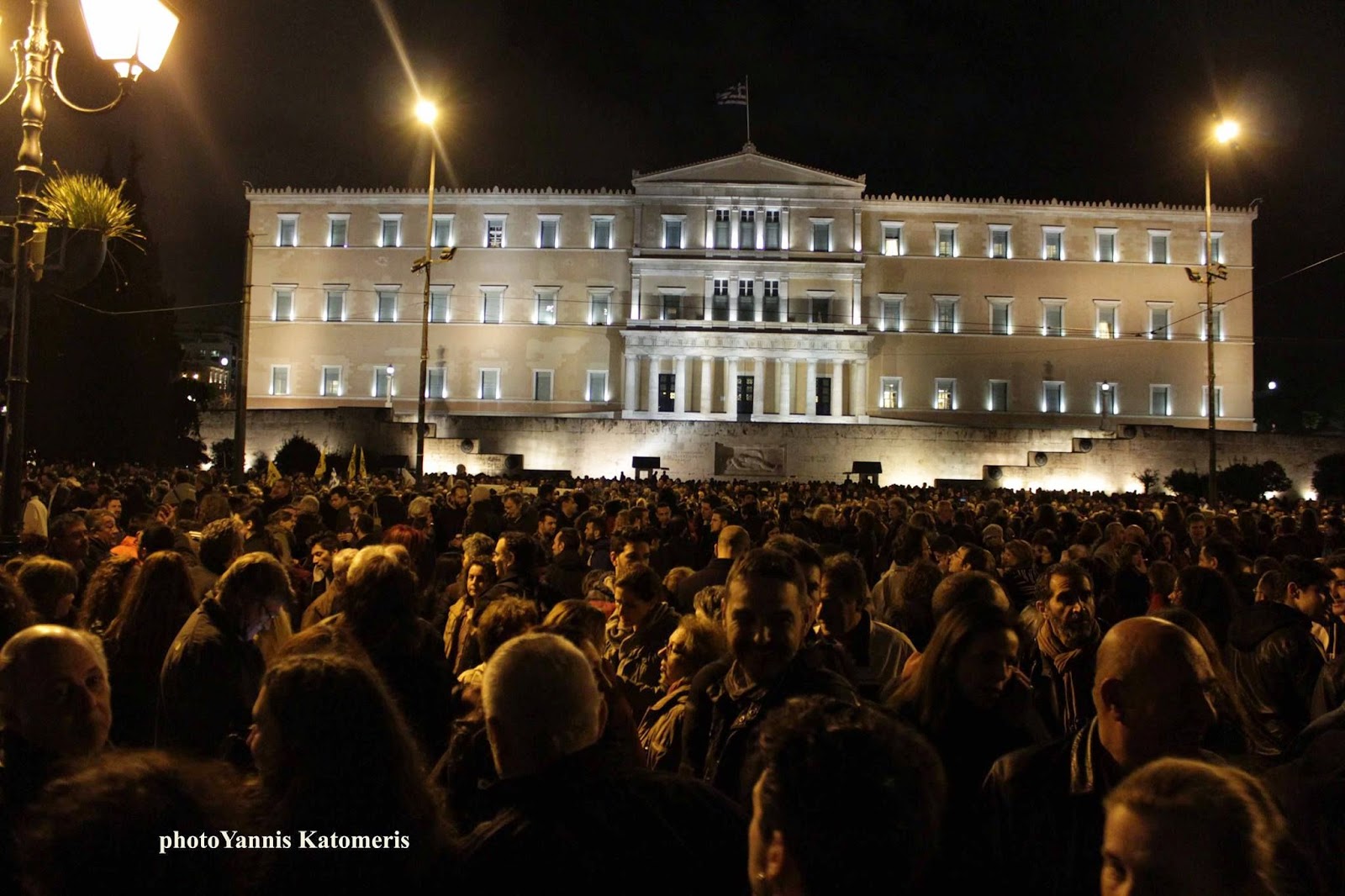 Even while Varoufakis and Schauble were not even agreeing to disagree, people gathered outside the German Ministry of Finance to protest at their government's harsh stance. 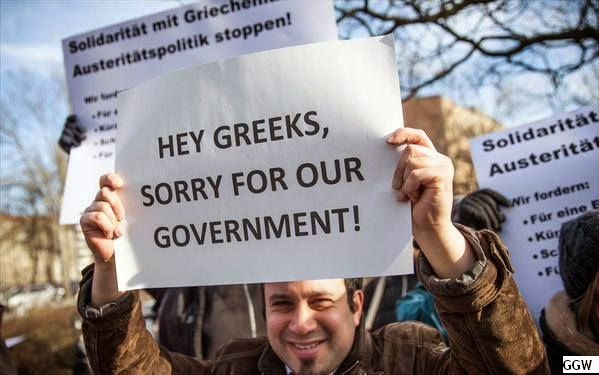 Incidentally, at the press conference following  that meeting most Greeks felt vindicated when a journalist raised a very pertinent question on the German companies aiding a lot of the corruption in Greece. Taking up the gauntlet Varoufakis expressed the question on all our lips...why is Germany not assisting the Siemens Greece strongman implicated in the bribery scandal Christoforakos to be extradited to Greece and tried? (In a strange turn of events, the next day the former Siemens Finance Chief at the time with all the inside info on the money trails was found dead...)

At the Press Conference with Chancellor Merkel on Monday, the US President mentioned that he would be waiting to hear  from 'Angela' how the IMF and Europe will work with Greece to bring it back to sustainable growth within the Eurozone while the Chancellor almost 'forgot' about Greece in her response that she is awaiting Greece's proposals in the next few days .

The meeting between the Greek and Austrian leaders on Monday this week was positive and encouraging.

Athens 2004 iron lady Gianna Angelopoulos-Daskalaki went public with an article on Huffington Post titled All we are Saying, is Give Greece a Chance while influential US Senator Bernie Sanders wrote to the US Fed Chair encouraging US involvement and support of Greece in its attempts.


Last night the new Greek government received its vote of confidence and today the battle for Greece's future in the Eurozone begins as the first of the critical negotiations start at the Eurogroup meeting.


Starting with Syntagma Square this evening at 6, All Together for Greece International Solidarity rallies supporting Greece and its fight against deadly austerity are being planned around the world as can be seen from the map below. Click on the link above to see details.

For us, we will restate a post we wrote exactly 3 years ago, in February of 2012, when Greece was once again going through so much...a lot has changed in those 3 years but there is still a lot that needs to be done in Greece and we need to stand with her!

'We are all standing behind and supporting our beloved Greece, a nation that has survived much worse over the course of her long history, and although we are confident that it will survive this challenge too, wherever we are in the world, we need to be united and strong; we need to show our love for our homeland; we need to realise that Greece needs us ALL, and especially our support.

Our support and solidarity is crucial at this moment.

We all need to BE THERE for the land we know and love, the land that has given so much and inspired so many on all levels throughout the course of her history, ancient and modern.

We need to support the Greek people materially and financially - to help look after the weak who are fighting for their families, who have lost their income and homes and who have no alternative -  but we especially need to support the Greek people's efforts, by giving them as much moral support and encouragement as we can. Our back up, encouragement and support will be critical  in the difficult days ahead, to help us and our people, the Greek people, remain strong, to hold our heads up high and stay the course as essential life-saving reforms and structural changes are made but with justice and time frames that work - austerity without justice will never work.

We need to bring out the best in our people all over the world, so that united we can all look forward to a better and brighter future for our homeland - the country we love - Greece.

We need to stand with and behind Greece to REBUILD, REPOWER, REINVENT, RESTART...

UNITED we Greeks have shown that we can create magic - Greek magic- and we will   again!

All we are saying... just give Greece a chance...to prove it! 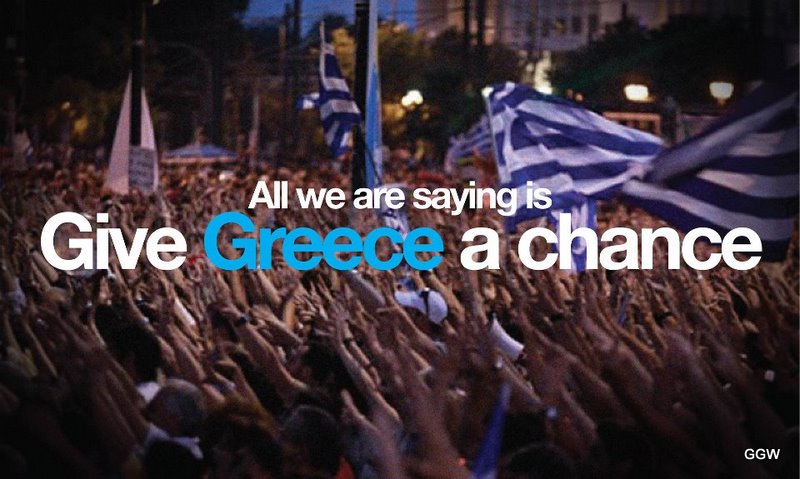 Photo Inspired and motivating by Gerasimos Katevatis of Kandy Creative

Email ThisBlogThis!Share to TwitterShare to FacebookShare to Pinterest
Labels: Alexis Tsipras, Give Greece a Chance, Siemens Scandal, SYRIZA, We are all GREEK, Yanis Varoufakis

We welcome feedback from our readers, but please keep your comments polite and respectful. Anonymous comments will be evaluated and published only if considered appropriate. 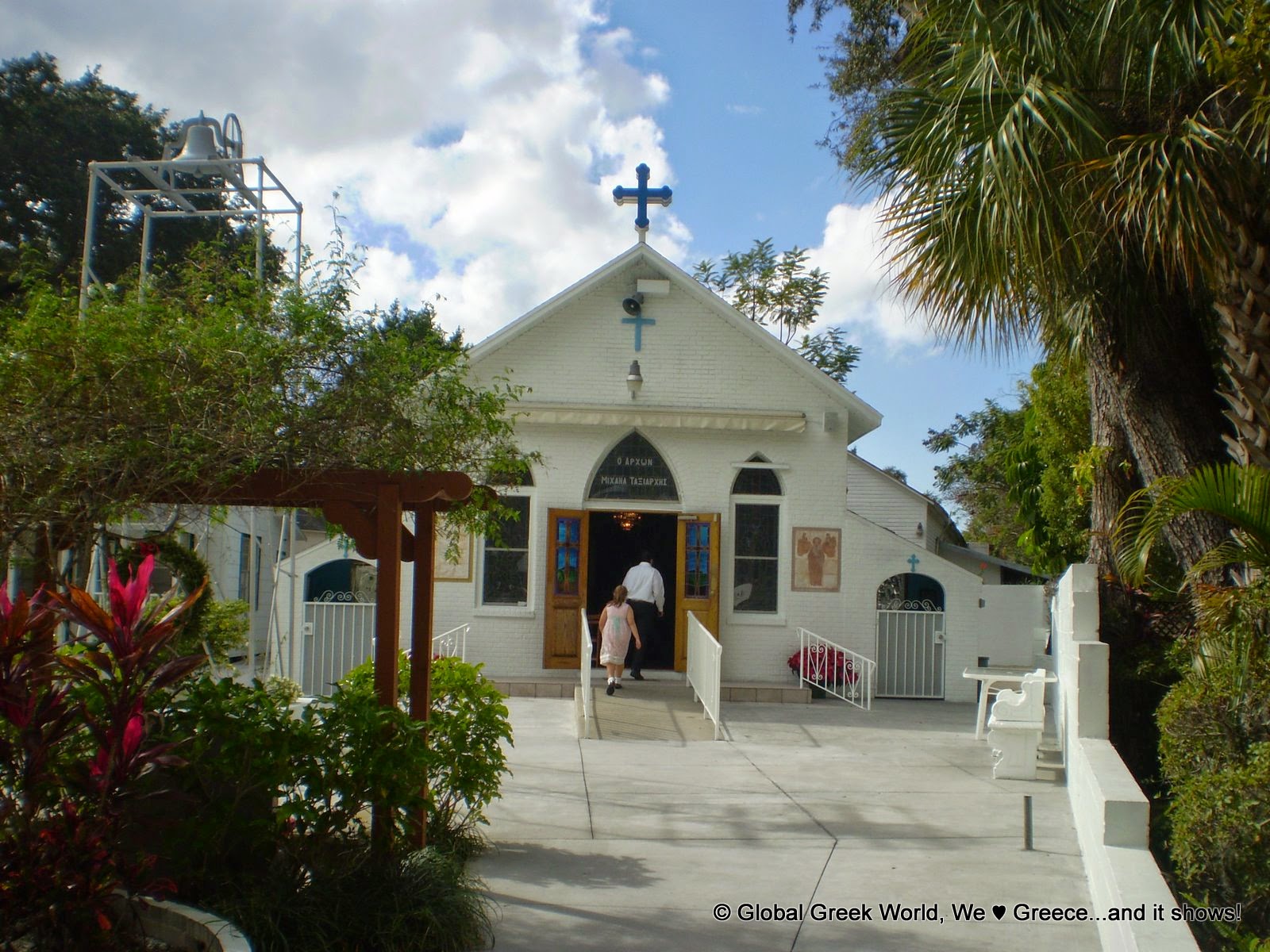 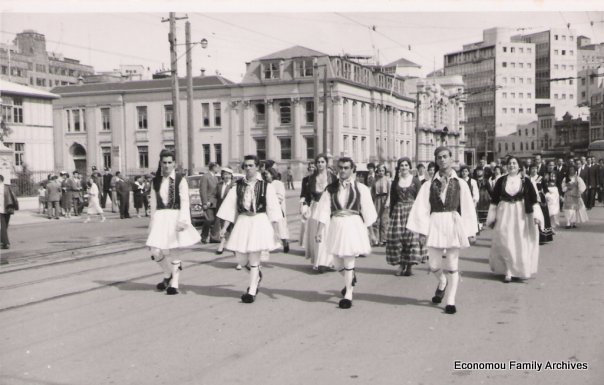 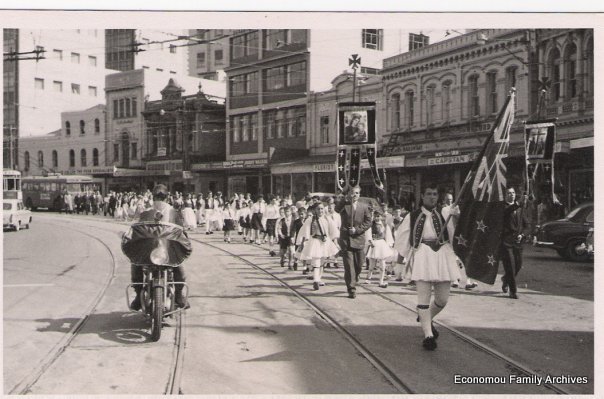 YOU CAN FIND US

OUR CONTRIBUTION TO THE KEEP CALM RANGE

Greek National Day Parade Through the Eyes of a Child.

GGW's MOST POPULAR POSTS THIS WEEK

This work is licensed under a Creative Commons Attribution-Noncommercial-Share Alike 3.0 Unported License.


An Australian decided to write a book about famous churches around the world. So he bought a plane ticket and took a trip to England thinking that he would start by working his way across Europe.

On his first day he was inside a church taking photographs when he noticed a golden telephone mounted on the wall with a sign that read "$10,000.00 per call".

The Australian, being intrigued, asked a priest who was strolling by what the telephone was used for. The priest replied that it was a direct line to heaven and that for $10,000.00 you could talk to God.

The Australian thanked the priest and went on his way.

Next stop was in France. There, at a very large cathedral, he saw the same golden telephone ...

Dignity does not consist in possessing honors, but in deserving them.
Aristotle

I was really too honest a man to be a politician and live.
Socrates

I am not an Athenian or a Greek but a citizen of the world.
Diogenes

It is indeed a desirable thing to be well-descended, but the glory belongs to our ancestors.
Plutarch

By desiring little, a poor man makes himself rich.
Democritus

GREEK DIASPORA VOTE:YES OR NO?

BOOK OF THE WEEK

FROM GREECE WITH LOVE FOR A FAMILY BAPTISM IN AMERICA 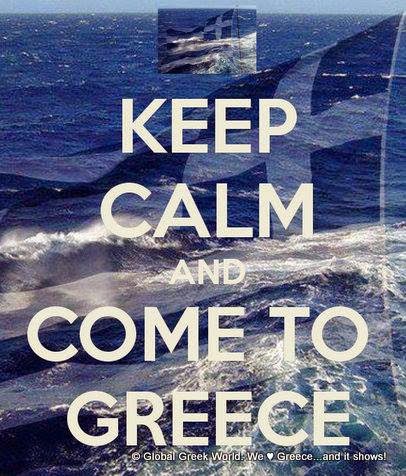 A MUST SEE: MATT BARRETT'S ALL MY FRIENDS FROM GREECE... 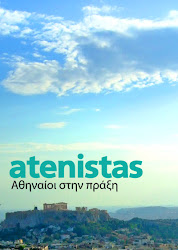 Repo(we)rGreece - It's Time WE Redefine Greece 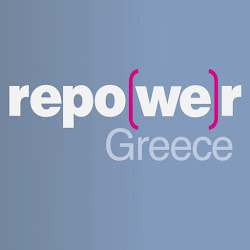 Translate easily from grenglish to greek!

When all is said and done, let's remember these words:

If there had not been the virtue and courage of the Greeks,

we do not know which the outcome of World War II would had been. 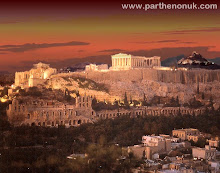 What's on in ATHENS